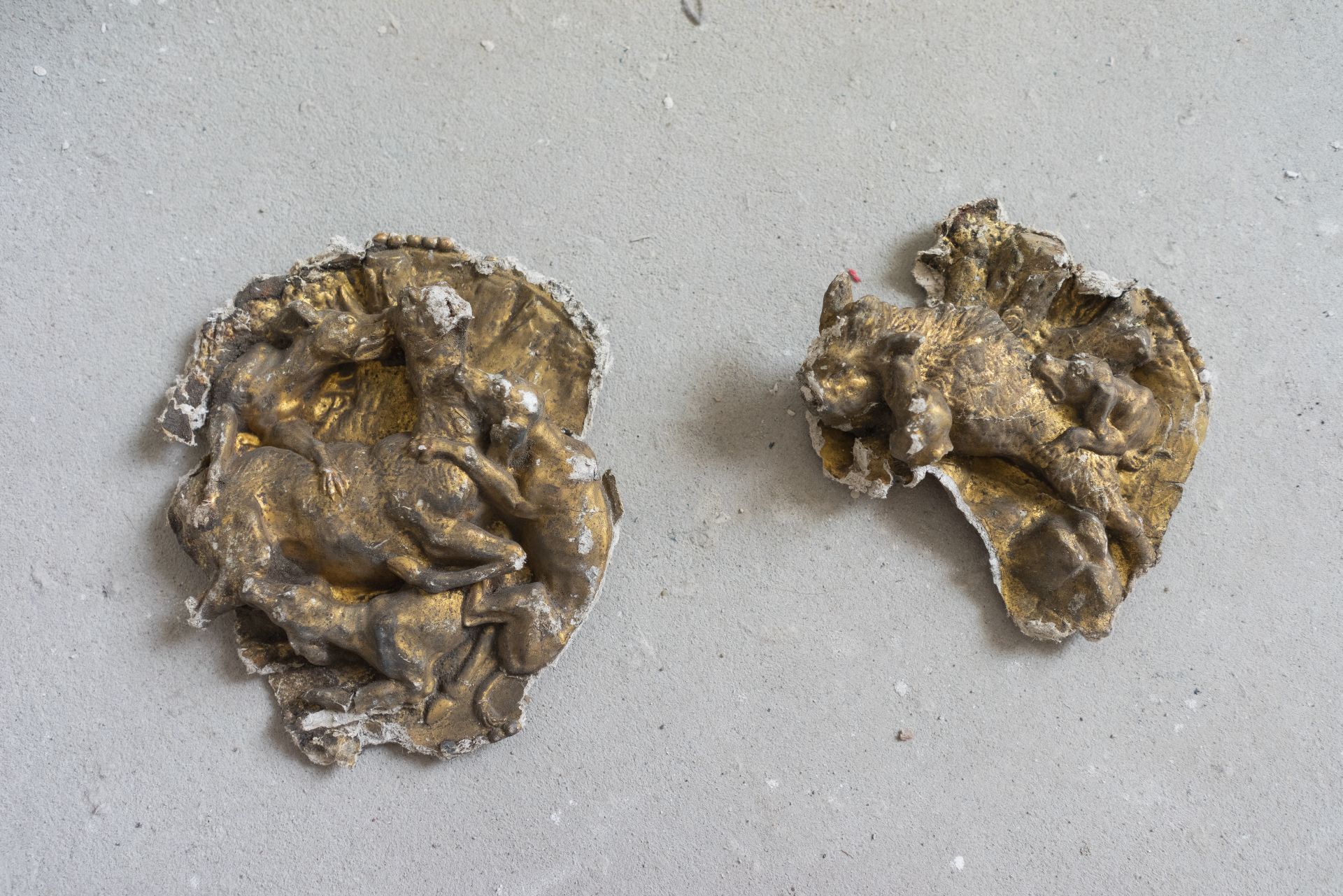 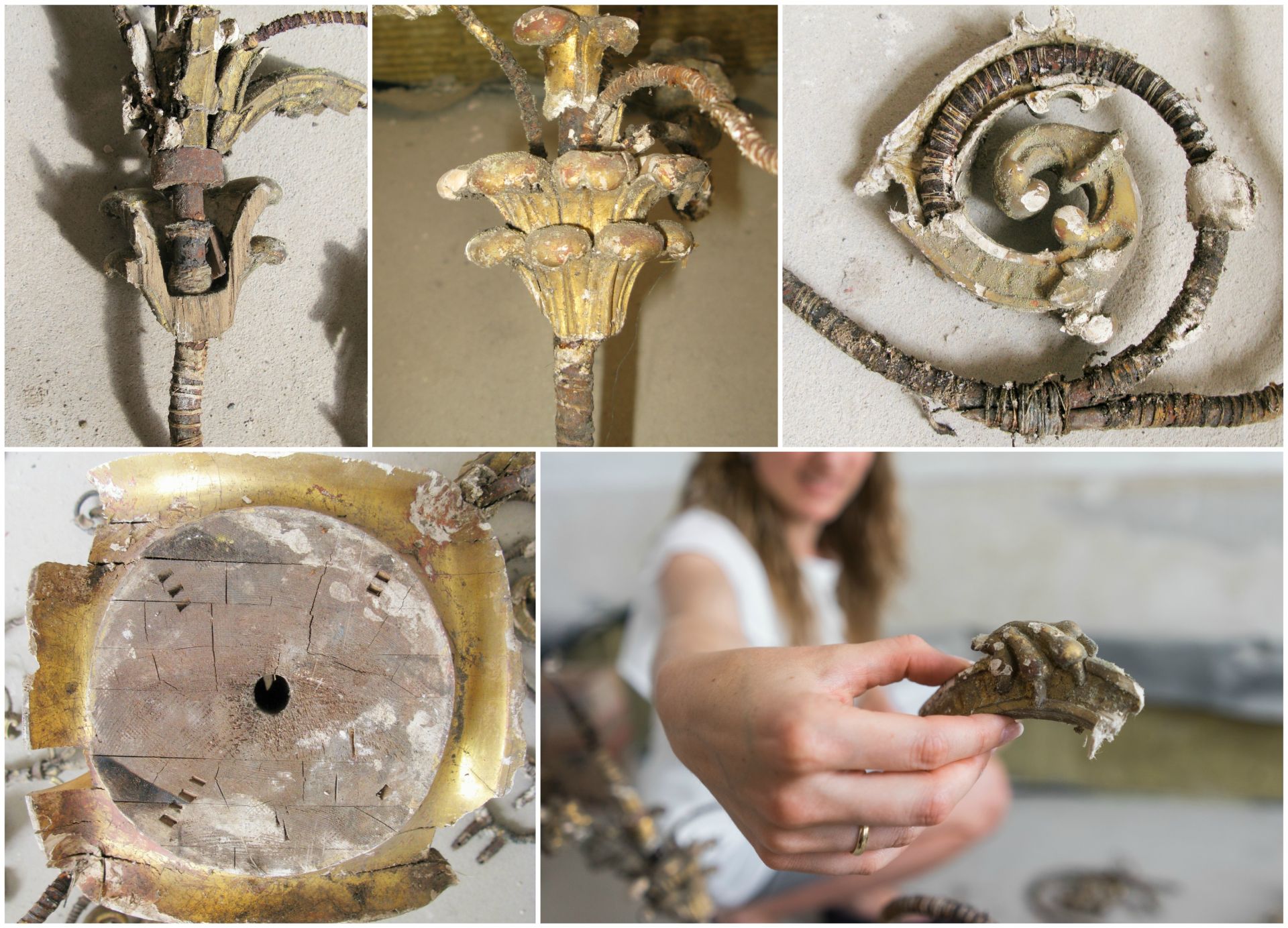 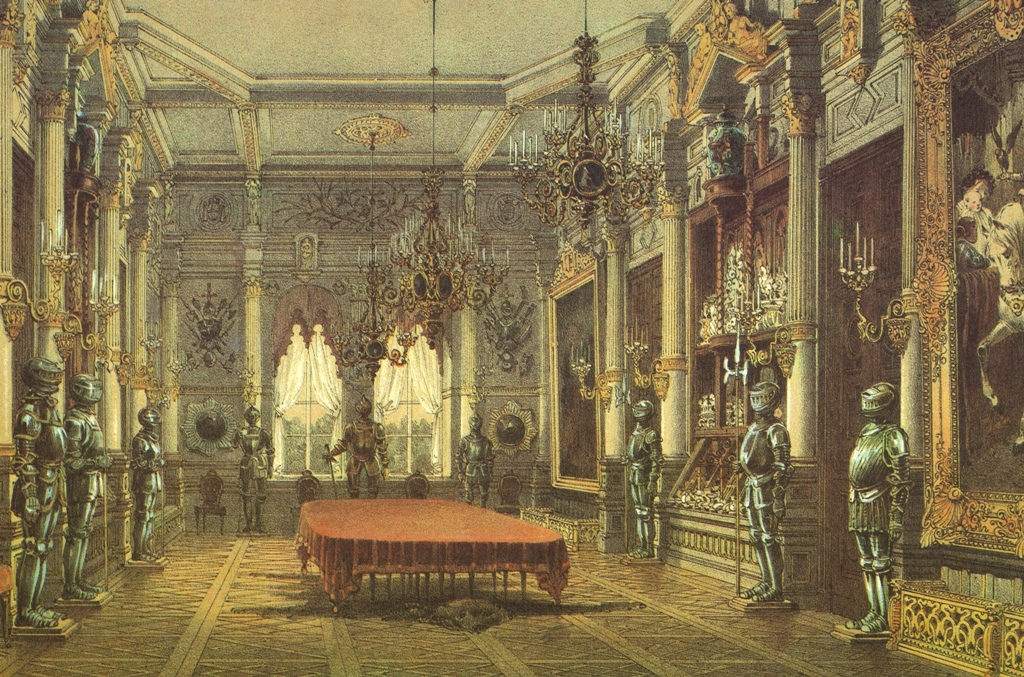 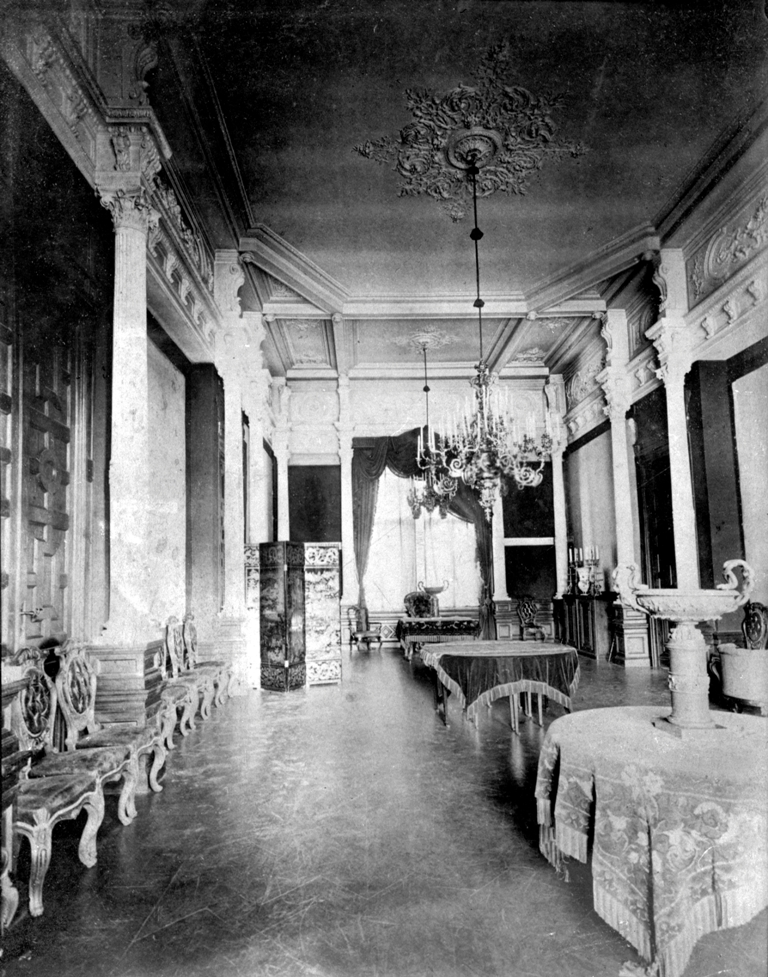 The chandelier found in the former Pac Palace

One of the most interesting and impressive examples of chandeliers made from papier mâché [1] has been found in the former Pac Palace at 7 Didžioji St. in Vilnius. Before the building was converted into a hotel, thorough archaeological, architectural and poly-chrome research was conducted starting in 2014. Uncovering layer after layer of wall décor, brickwork and interior spaces offered an opportunity for art historians to reconstruct the rich history of the palace’s development [2]. As the works continued, in the summer of 2017, while clearing the unused auxiliary servants’ staircase, metal and moulded constructions were found. When all the fragments were extracted, it turned out to be the remnants of a chandelier that once hung in the palace.

The attribution of the chandelier is facilitated by its stylistics. Replicated and freely combined decorative elements from different periods (neo-Renaissance, neo-Gothic) suggest that the chandelier was manufactured by professional and skilled masters in the period of Historicism, i.e. in the middle of the 19th century.

Though the surviving details were quite revealing about the original appearance of the magnificent chandelier and the approximate time of its production, the lost upper and lower parts of its stem made it difficult to realise the total structure of the artefact. For the sake of theoretical reconstruction, the author was looking for analogues in palace interiors abroad and albums of historical development of light fixtures, until the photographs of the interior of Duke Wittgenstein’s Palace from the late 19th and early 20th century were found. They allow us to advance two hypotheses: 1) the remains of the chandelier found at 7 Didžioji St. may have originated from the Verkiai Palace; 2) the chandeliers for both the Wittgenstein and Pac palaces or the military offices of tsarist Russia that were based in these buildings were ordered from the same workshop.

In the middle of the 19th century, the former Pac Palace was already used as a military headquarters of tsarist Russia. Yet, the documents of this institution contain no mention about the acquisition of such an expensive chandelier [3], thus presently the first version seems more plausible, and we are going to analyse it in more detail.

Circa 1840, the Verkiai Palace was acquired by the Russian duke and German prince Ludwig Adolf Wittgenstein. He converted the eastern servants’ quarters into a palace and sumptuously furnished its interiors. Almost immediately after the reconstruction, in 1848, Vasily Sadovnikov captured its most opulent hall, called the Knights’ Hall, or a dining room, in one of his watercolours, whose colour reproductions were multiplied as part of The Vilnius Album published by Jan Kazimierz Wilczynski in 1842–1875.

In the chromo-lithograph, the view of the chandeliers is not very precise, but distinctive and easily recognisable details stand out: round medallions, S-shaped branches with scrolls and five candleholders at the ends, and a specific bent of the branches. The designer of the Knights’ Hall was the architect of Swiss descent, Simon Bernar [4]. Three large chandeliers must have been produced on commission specially for this space, possibly by Russian masters who were skilled in the use of papier mâché technique, or in Western Europe.

In the early 20th century, the Dukes Wittgenstein moved to Germany. As the estate changed hands, the palace gradually deteriorated. During World War I, art treasures collected by the dukes were plundered. Most probably during the wars, chandeliers were scattered in different places, and one of them may have been taken by tsarist officers to decorate their premises on Didžioji St.

A cubic-shaped wooden fragment of the stem of this sumptuous hanging light fixture has survived. At its top, one, two, three and four notches marking the place of a concrete branch were made at each corner. This largest surviving wooden part of the stem was decorated with moulded papier mâché medallions representing hunting scenes. The analysis of the surviving fragments shows that the chandelier had eight branches. Only seven of them have survived to this day: three larger and four smaller.

Though the condition of the chandelier is regrettably poor, the crumbled décor shows the features of the papier mâché technique and the assembling of papier mâché details on the artefact. Interestingly, not all the elements of branch decoration were made from pulped paper. Some details were likely made from wood for the sake of durability.

Referring to archival iconographic material and the features of the discovered artefact, we can assume that the fragments of the chandelier found in the former Pac Palace may belong to one of the three chandeliers from the dining room of the Verkiai Palace. So far it is the only chandelier surviving in Lithuania with so many papier mâché décor details.

* Papier mâché – pulped paper, usually combined with glue, chalk and sometimes sand. It can be shaped by moulding and then baking, and was used extensively in the 18th and 19th c. For small articles of furniture and decorative objects, in: Edward Lucie-Smith. The Thames and Hudson Dictionary of Art Terms. London: Thames and Hudson Ltd, 1995, p. 140.