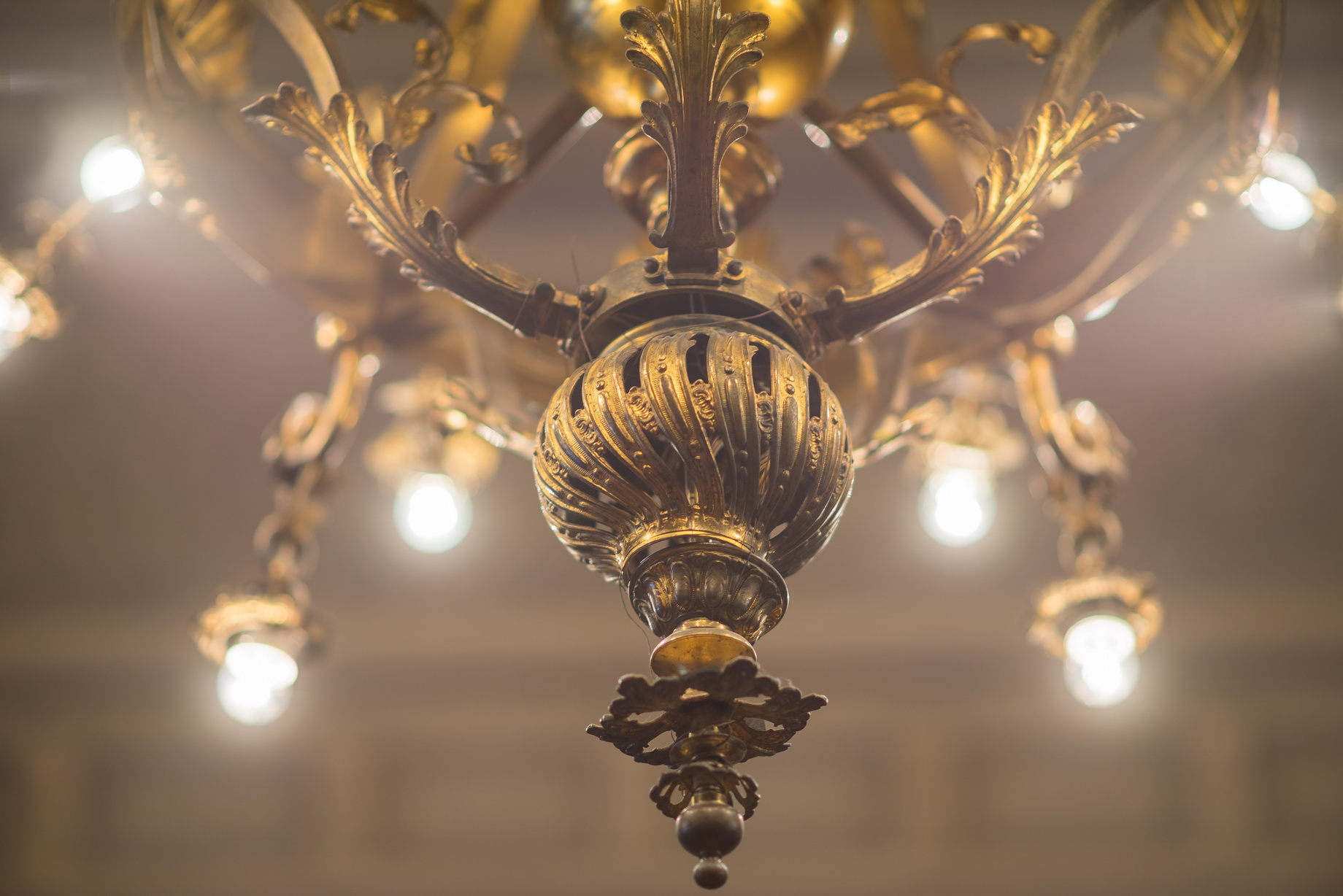 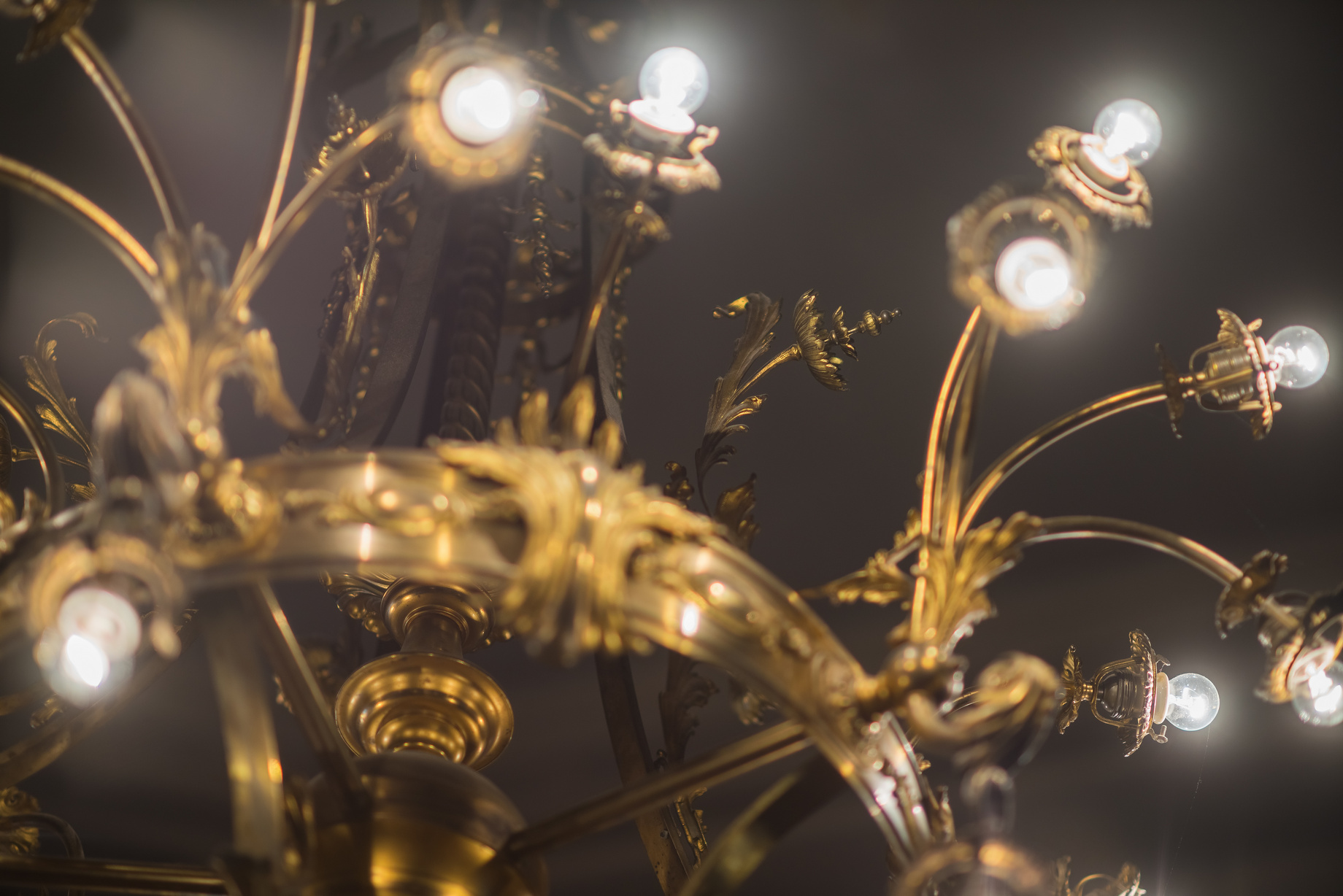 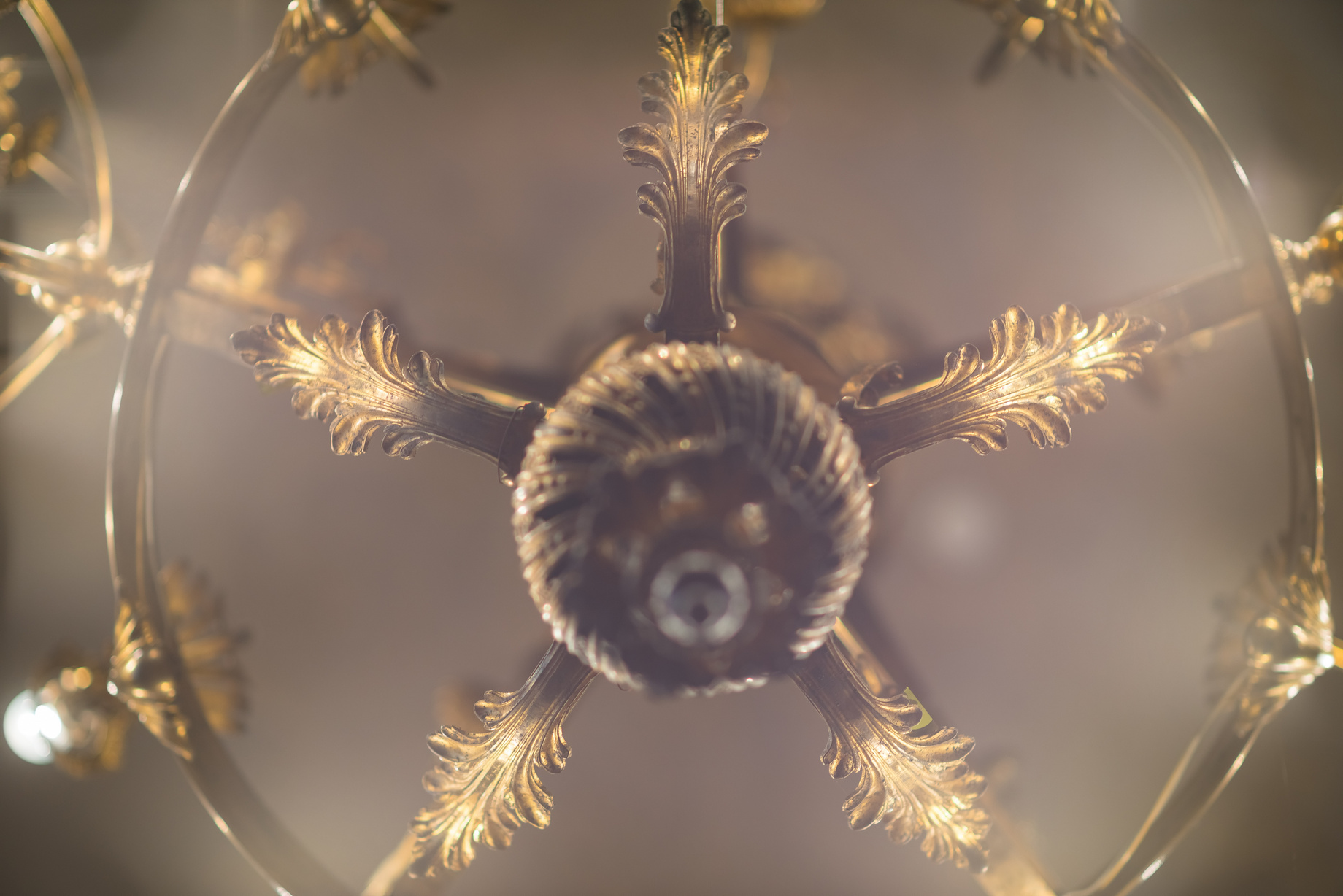 Chandeliers are the most ornate ceiling-mounted light fixtures that produce much light. Their long and rich history in various European countries is just beginning to receive thorough research attention. In the course of centuries, the forms and décor of chandeliers sensitively and expressively reacted to constant changes in European culture. As a result, several main types were formed, which are divided by researchers into melusines, ring/crown/wheel-shaped, one rod/stem/shaft/baluster, frame and dish-light chandeliers. Before the beginning of the 18th century, chandeliers were mainly produced from brass, iron, wood and horn. In the late 16th century, chandelier frames began to be decorated with rock crystal strings and pendants. From 1700, chandeliers were produced from glass, man-made crystal, and somewhat later, porcelain, papier-mâché and other materials. The variety of materials gave the manufacturers freedom and diversity of forms, but before the invention of the electric bulb, the source of light in chandeliers came from candles, which always had to be directed upright. With the invention of electricity, there remained almost no restrictions for chandelier forms.

In the rich history of light fixtures, chandeliers from the 16th to the first half of the 20th century that survived in Lithuania occupy an important place. The aim of this project is to present them. It is important to add that many chandeliers that decorated or still decorate Lithuanian buildings were brought from other European countries. Local attribution can be given only to a small part of these artefacts. However, this fact does not lessen their importance. Like other artefacts reflecting material culture, chandeliers vividly illustrate the history of Lithuania’s artistic import.

Due to the turbulent history of the Lithuanian state, only a small part of chandeliers have reached our times. Many of them are no longer found in their original places, thus chandeliers of high artistic value from the interiors of sacral and secular buildings, which are currently held in Lithuanian museums and are included or not yet included in the register of cultural heritage of the Republic of Lithuania, are analysed in this database. Chandeliers held in private interiors or private collections are hardly accessible and have been excluded from the catalogue. Chandeliers that had extraordinary artistic and historical value, but considerably deteriorated or did not survive, and have been recorded in visual material, are presented separately. Only the artefacts manufactured by professional masters are analysed, while ethnographic wooden specimens that were hung in rich peasants’ homes and special chandeliers used for bridal showers are not considered. The significantly deteriorated chandeliers held in museums are currently not included either – they will supplement the database in the future, after their restoration.

The chronological limits of the database include the period from the 17th century to the 1930s. This choice was determined by the survival of the earliest artefacts that have reached our days were manufactured in the Renaissance era and are dated to the late 16th century. The latest light fixtures analysed in the catalogue date to the interwar period. During World War II, several large metallurgical centres in Europe were destroyed, factories that manufactured chandeliers were closed, and their equipment was taken away or used for the war needs. This process took place in Lithuania as well, where the companies that manufactured chandeliers in the early 20th century and in the interwar period, even in small quantities, ceased their activity at that time. In the future, we intend to supplement the catalogue with descriptions of exceptional chandeliers created from the second half of the 20th to the early 21st century.

Each entry of the database includes professional photos of chandeliers, data about the time, place, materials and techniques of production of the chandelier(s), and a detailed description of the artefact. A brief overview of the features of pendant chandeliers of a respective period is given, the type of a particular chandelier is defined, and its visual features are analysed. Whenever possible, data on historical images, written sources related to the artefact, information about the conducted restoration works, lost parts as well as known analogues in Lithuania or foreign countries are presented. The description ends with conclusions about the value and the extraordinariness of the artefact in the general context of Lithuanian and European chandeliers.

Alantė Valtaitė-Gagač. Origin, Types, and Functioning of Chandeliers with Serpent Arms: from the Netherlands to Lithuania, in: Art History and Criticism, Vol. 15, 2019, p. 5-20

Chandeliers with serpent arms held at the National Museum of Lithuania and the Lithuanian Art Museum are among the earliest found in Lithuania. Previous efforts to find chandeliers of similar décor in Latvia or Poland while collecting material on lighting fixtures in Lithuania and the neighbouring countries were unsuccessful. Due to that reason, it was thought that the spread of these chandeliers of extraordinary décor was limited to the territory of Lithuania. A closer and more thorough look into collections of Western European museums has revealed that the motif of an elegantly coiled snake on chandelier arms should be related to Hans Rogiers, a founder who worked in Amsterdam in 1598–1638.

In the article, the origin of chandeliers with serpent arms in Western Europe and the ways they could have possibly reached Lithuania are traced back for the first time. Specimens that survived or did not survive in Lithuania, their development and problems of dating are analysed. Their functioning space is explored and the subject of their symbolism is addressed. The article aims to present and evaluate the surviving chandeliers with serpent arms in Lithuania. In the research, instruments of formal, comparative, iconographic, and reconstructive analysis were used.

Alantė Valtaitė-Gagač. Origin, Types, and Functioning of Chandeliers with Serpent Arms: from the Netherlands to Lithuania, in: Kultūros paminklai, Nr. 23, 2019, p. 134-147

Alantė Valtaitė-Gagač. Papier-mache Chandeliers in the 19th Century: from History to Attribution and Reconstruction, in: Kultūros paminklai, Nr. 22, 2018, p. 112–121.

During the restoration of the Palace of Pac family in Vilnius old town (Didžioji Street. 7), fragments of papier-mache chandelier were found. The new material collected for the theoretical reconstruction of this luxurious artefact led to the publication of rare earlier unexplored papier-mache light fixtures in Lithuania.This article shortly presents types of papier-mache techniques and workshops in the foreign countries.  Data of the written sources are analysed, various survived and not survived examples are overviewed. The main focus of article is the chandelier found in the Palace of Pac. Stylistics of fragments of the item shows that it was made in the middle of the 19th century. As the top and the bottom parts of the item were lost, the search of analogue chandelier was made. Accidentally the photo of the Palace of Verkiai were discovered, where three identical chandeliers can be seen. Referring to this iconographic material and the features of the discovered artefact, it can be assumed that chandelier may belong to one of the three chandeliers from the dining room of the Verkiai Palace. So far it is the only chandelier surviving in Lithuania with so many papier mâché décor details.

There are very little chandeliers survived from XVII c. in Lithuania. Few examples that reached our days can’t show the whole panorama of chandeliers of XVII c. of Lithuania, therefore thorough analysis of written sources was initiated. The purpose of this article is to introduce the social prevalence and functioning of chandeliers: to find out where, how many and in which way chandeliers were hanging, what materials were used in manufacturing of chandeliers, how many branches they had and what forms were custom for chandeliers of Lithuania in XVII c. In order to better understand the theme of article, development of European chandeliers to XVII century is introduced in article as well. Different Polish and Latin words (korona / corona, lichtarz / candelabra, jelenie głowa z rogami / cornibus cervini, swiecznik) that were used to describe chandeliers in written sources are introduced. They also show that various types of chandeliers existed: circular chandeliers reminiscent of a crown or wheel, whittled from wood in form of deer head with horns, orb chandeliers formed from decorated bars and one central stem having chandeliers. All these shapes were typical for Europe lands during IX–XVII centuries. The records in documents showed, that chandeliers usually were hanging in the interiors of churches and houses of very rich people as noblemen and bishops. Meanwhile petty noblemen and citizens of Vilnius were using candlesticks. Numerous references of chandeliers in the inventories of churches in XVII c. let us know that usually there was only one chandelier in the church. Also that most often it was hanging in the center of church, sometimes in front of great altar. The majority of chandeliers in documents are named as lichtarz wiszący and probably chandeliers with one central stem were usually called by this term. Undoubtedly, must be said that XVII century was the age of chandeliers made from brass. According references in documents, six, also eight or twelve branch chandeliers were most popular. To end with, valuable references of XVII c. documents showed that there were more various types of chandeliers than can be seen in Lithuanian museums or public interiors. Chandelier descriptions founded in the inventories revealed the basic information about chandeliers of Lithuania in XVII c., but also raised new questions and problems, which require new researches in future.

European Society and Documentation Centre for Chandeliers, Light and Lighting

The project is financed by: