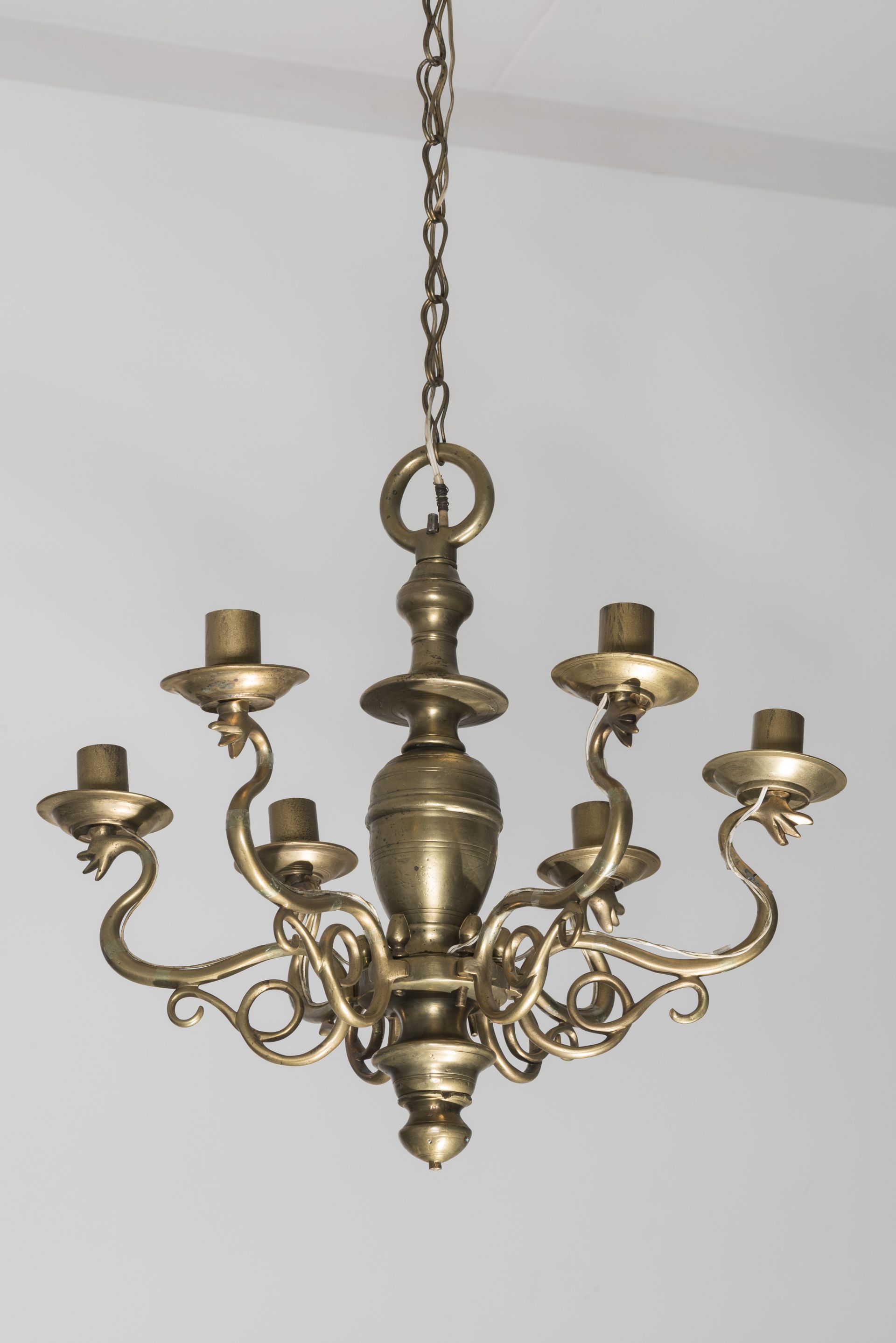 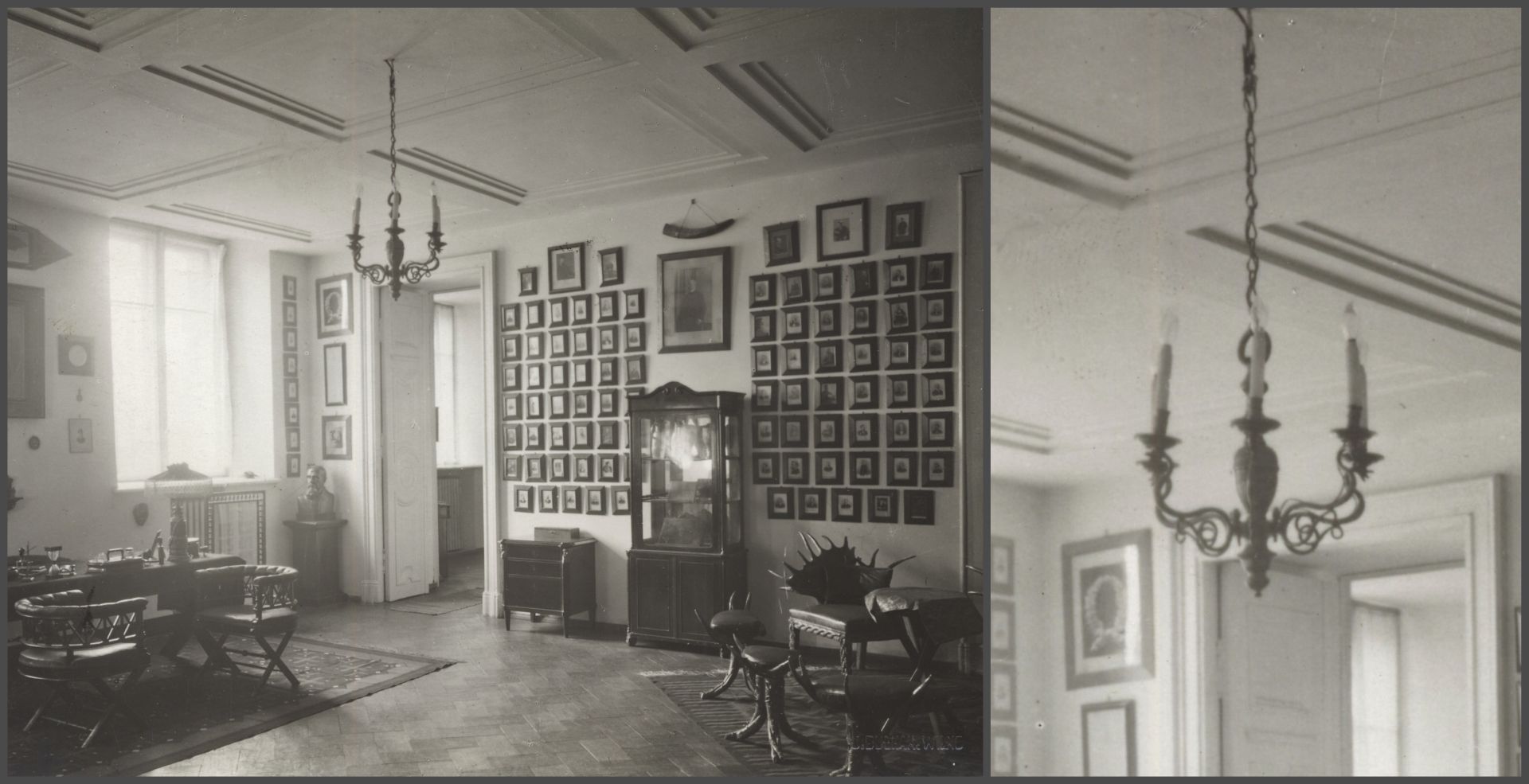 The National Museum of Lithuania (hereinafter referred to as the LNM) holds two fully surviving chandeliers with serpent arms. The stem of chandelier IM-4618, dated to the early 17th century, is baluster-shaped and composed of several elements. This shape is typical of the Renaissance period. A large hoop for hanging at the top of the stem and a disc under it are very similar to the ones seen in Hans Rogier’s chandeliers. The arms are set into a disc-shaped plate and fastened by plugs with oval heads. As is typical of early chandeliers, each arm, its place of fastening, and plug are marked by a certain number of punched dents. Candleholder and chandelier arms made by the Amsterdam-based founder are engraved with imitation snakeskin scales and the serpent’s head is elaborate: it has eye, nose, and ear openings and a tongue. Arms of the chandelier held at the LNM are smooth and the serpent’s head is heavily stylised, without any details, and executed with great technical and visual craftsmanship. A two-coil ornament, composed from the serpent’s body and tail, is almost identical to the one on Rogier’s arms, only the serpent’s head seems to be raised somewhat higher in the Lithuanian arm. The chandelier is electrified, thus original candle cups are removed and drip pans have holes for wires. Rogier’s dated candleholder confirms the assumption that the chandelier held at the LNM has a mannerist shape. According to the museum’s inventory books, the chandelier was received from the Wróblewski Library of the Lithuanian Academy of Sciences. A photograph made by Jan Bułhak in 1932 testifies that it hung in Tadeusz Wróblewski’s office.

It is obvious that chandeliers with serpent arms made their way to the territory of the Grand Duchy of Lithuania from the Netherlands. There has been little research on chandeliers from the Renaissance and Baroque periods in the neighbouring countries, thus we can only hypothetically guess who and by what routes brought them to these parts. Taking into account the fact that quite many chandeliers with serpent arms in Lithuania used to hang in synagogues, we can guess that the spread of these chandeliers in Lithuania might have been a result of the constant migration of Judaic people. Yet, according to Dubbe and van Molle, majority of the surviving serpent-shaped chandeliers in the Netherlands are found in Dutch Reformed (Protestant) and Catholic churches. Thus a second hypothesis is possible: the appearance of these artefacts in Lithuanian lands is related to Dutch merchants and the noble Protestant Radziwiłł family that maintained close contacts with them.

Elegant chandeliers and hanging candleholders of harmonious proportions and pure forms created by founder Hans Rogiers in the Dutch Golden Age of the late 16th–early 17th century, are works of extraordinary artistic value. Separate pieces found in European auctions and antique shops, attributed to Northern Europe and occasionally Sweden, only confirm that the area of distribution of these chandeliers has not been sufficiently explored and the subject is still waiting for further research.

Referring to research data of foreign historians and surviving iconographic material in Lithuania, it is obvious that chandeliers with symbolic serpent arms were not specially meant for interiors of a single specific type, but were used in different sacral and secular, public and private interiors both in the Netherlands and in Lithuania. The functioning of these chandeliers in prayer houses of various denominations was possibly determined by the universal interpretation of the serpent symbol.

Full article The Origin, Types and Functioning of Chandeliers with Serpent Arms: from the Netherlands to Lithuania written by Alantė Valtaitė-Gagač read here in English or Lithuanian.