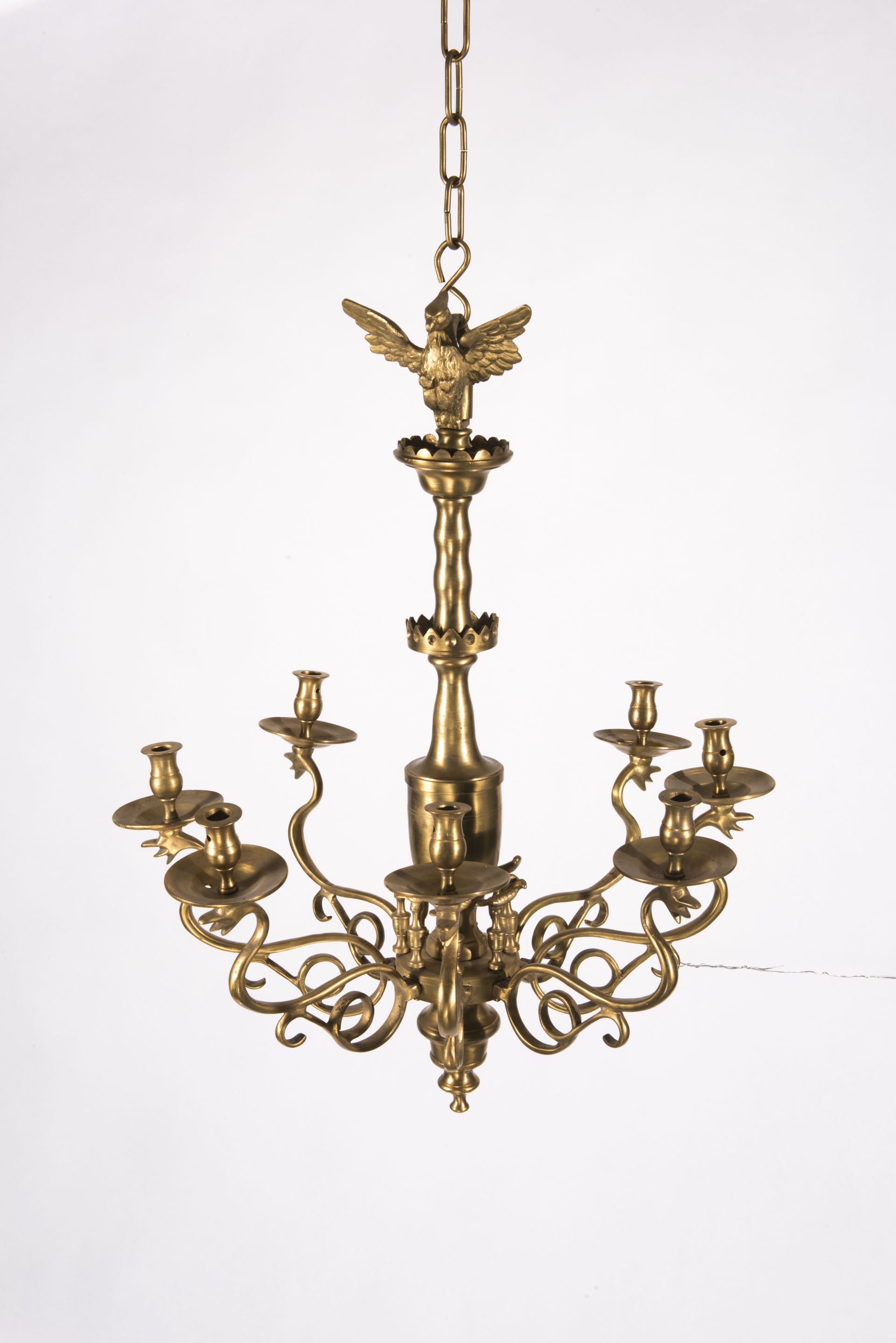 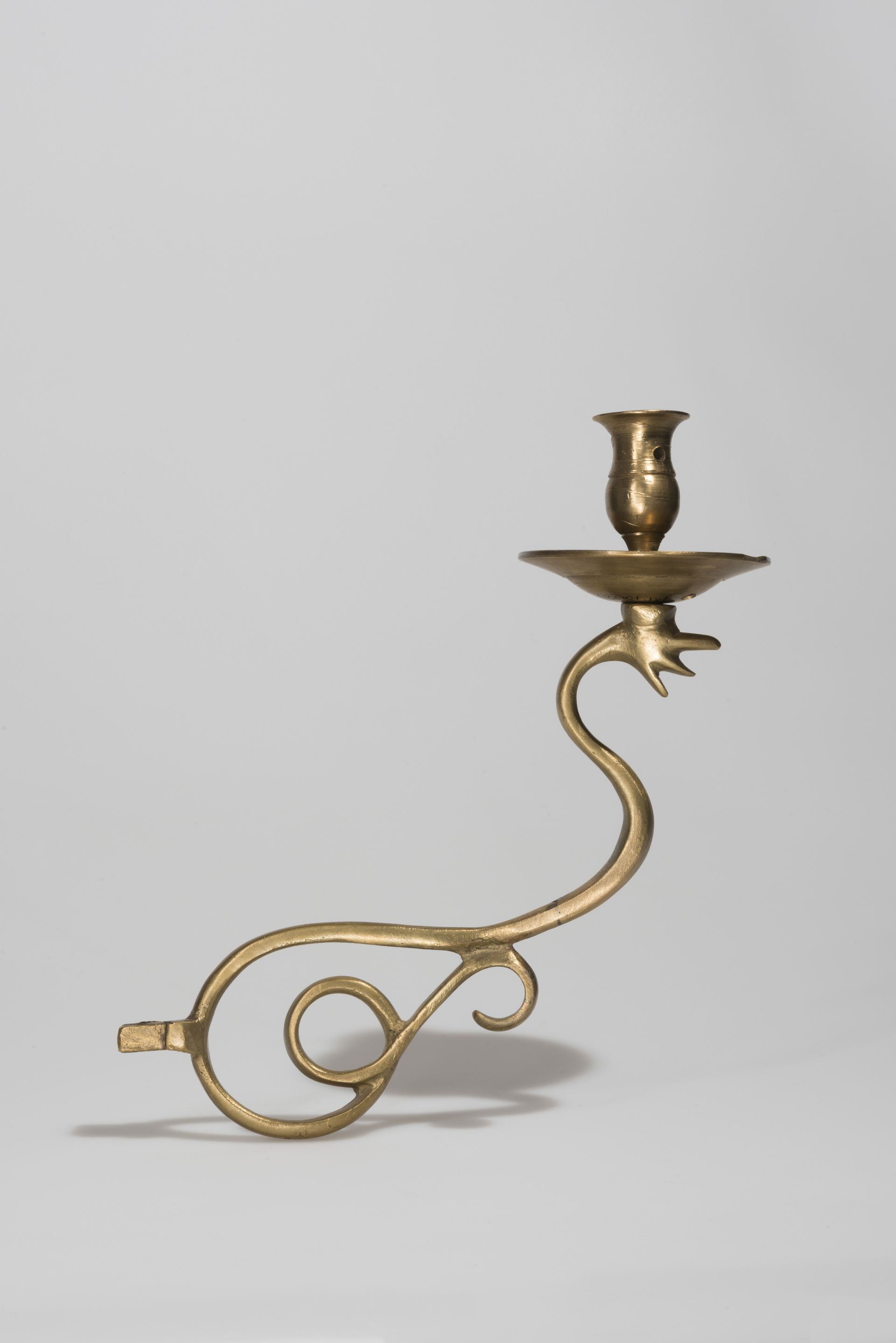 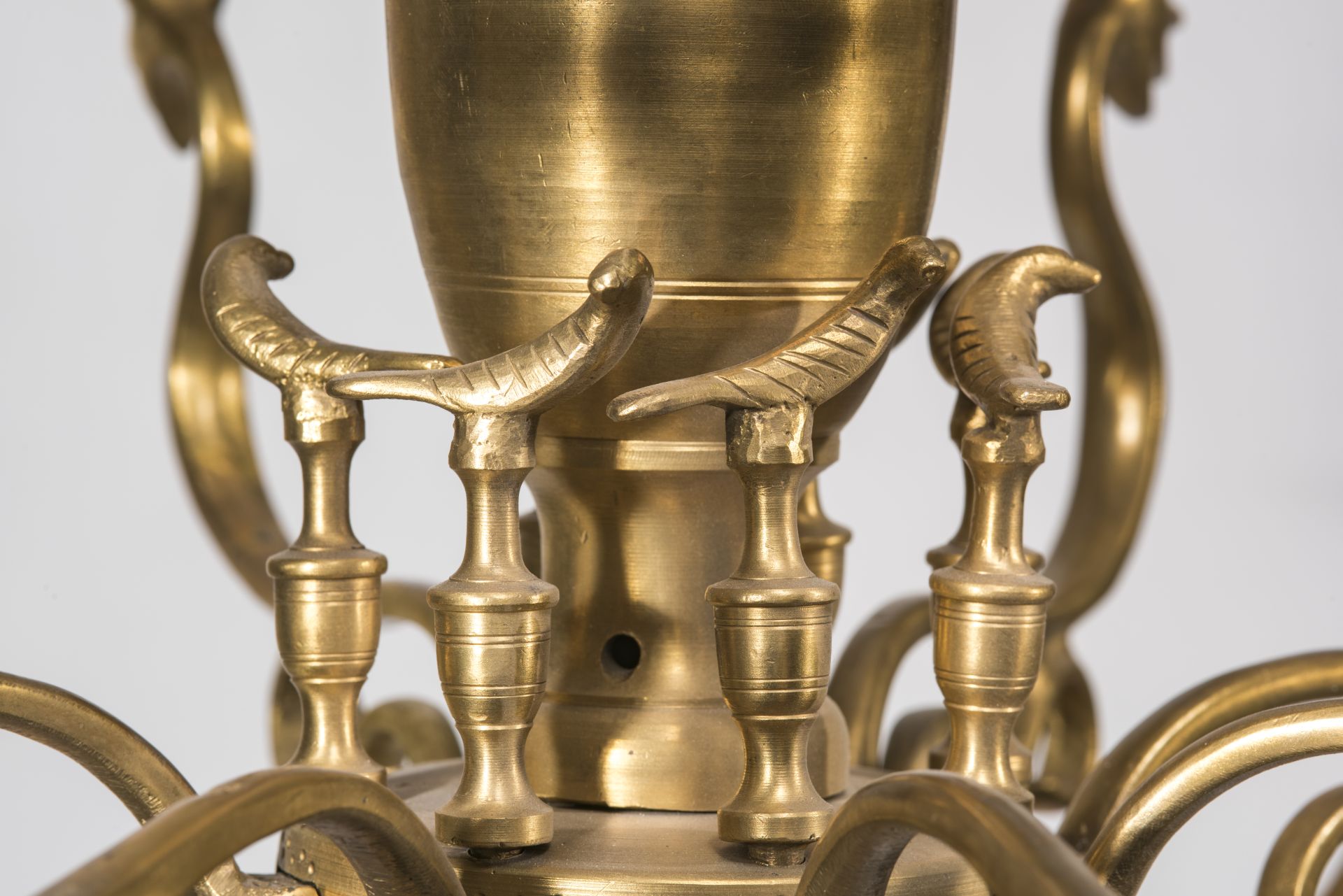 The National Museum of Lithuania holds two fully surviving chandeliers with serpent arms. Arms of the chandelier Inv. No. IM-13029 have two coils and are the most similar to the ones produced by Rogiers. There are eight of them in total. The stem of the chandelier is reminiscent of the ancient Greek vessel lekythos (ancient Greek lēkythos). The arms are connected to the stem by highly decorative retainers that repeat the shape of the stem, and each has a little bird with folded wings turned sideways on the top. Regarding the shape of the stem, it has to be noted that its lathed, elongated upper part is somewhat unusual. It is decorated with two crowns, which also puts to doubt the authenticity of this part of the chandelier. The chandelier has a cast figure of a spreadeagle at the top.

A candlestick with serpent arm is stored in the Dutch National Art and History Museum (Rijksmuseum) in Amsterdam (look here). On the edges of the holder, initials and date are cast "Hans Rogier, 1599" and a record encouraging to protect from the fire of serpent and to be brave like lions. Being a successful caster for forty years (1598–1638), Hans Rogier has contributed significantly to the golden age of the Netherlands. He worked in the Protestant environment. Accordingly, his works are perfectly fine-shaped and had not only a lighting but also a didactic function. The chandeliers cast by him are still hanging in the Roman Catholic and Reformed Churches.

It is obvious that chandeliers with serpent arms made their way to the territory of the Grand Duchy of Lithuania from the Netherlands. There has been little research on chandeliers from the Renaissance and Baroque periods in the neighbouring countries, thus we can only hypothetically guess who and by what routes brought them to these parts. Taking into account the fact that quite many chandeliers with serpent arms in Lithuania used to hang in synagogues, we can guess that the spread of these chandeliers in Lithuania might have been a result of the constant migration of Judaic people. Yet, according to Dubbe and van Molle, majority of the surviving serpent-shaped chandeliers in the Netherlands are found in Dutch Reformed (Protestant) and Catholic churches. Thus a second hypothesis is possible: the appearance of these artefacts in Lithuanian lands is related to Dutch merchants and the noble Protestant Radziwiłł family that maintained close contacts with them.

It is likely that the interiors of the Roman Catholic Churches in Lithuania were decorated by chandeliers like in The Netherlands. The curled serpent arms were recorded in the Church of Bagaslaviškis. Chandeliers with serpent arms have functioned in the interiors of the prominent cultural leaders and important cultural institutions in the first half of the last century. It is likely that this décor motif in Independent Lithuania took a completely different symbolic meaning, and in the searches of cultural identity, it was associated with Lithuania's past and the Baltic roots.

The investigation revealed that chandeliers with serpent arms of exceptional artistic value were not specifically designed for any type of interiors, but in the Netherlands and Lithuania were used in different sacral and secular public and private interiors. The functioning of these chandeliers in chapels of different religions was potentially determined by a universal symbolic approach of a serpent/snake.

Full article The Origin, Types and Functioning of Chandeliers with Serpent Arms: from the Netherlands to Lithuania written by Alantė Valtaitė-Gagač read here in English or Lithuanian.